Conventional electronics only consider the charge of electron and ignore the electron spin. Spintronics, or spin electronics, study the role played by electron spin in solid state physics. New spin-based phenomena, including spin-transport, spin transfer toque or spin Hall effect have brought new horizons to electronics and magnetism, which have realized lots of potential applications.

Spin transfer predicted by Slonczewski and Berger has attracted a great deal of attention in recent years. Nanomagnetic device with perpendicular magnetic anisotropy is very important for further magnetic random access memory (MRAM) applications, because it can not only satisfy the thermal stability requirement but also have no limit of cell aspect ratio, and have an advantage of scaling for high packing density. Our group has demonstrated the very first spin momentum transfer in a nanomagnetic device with perpendicular magnetic anisotropy for both free and fixed magnetic layers. 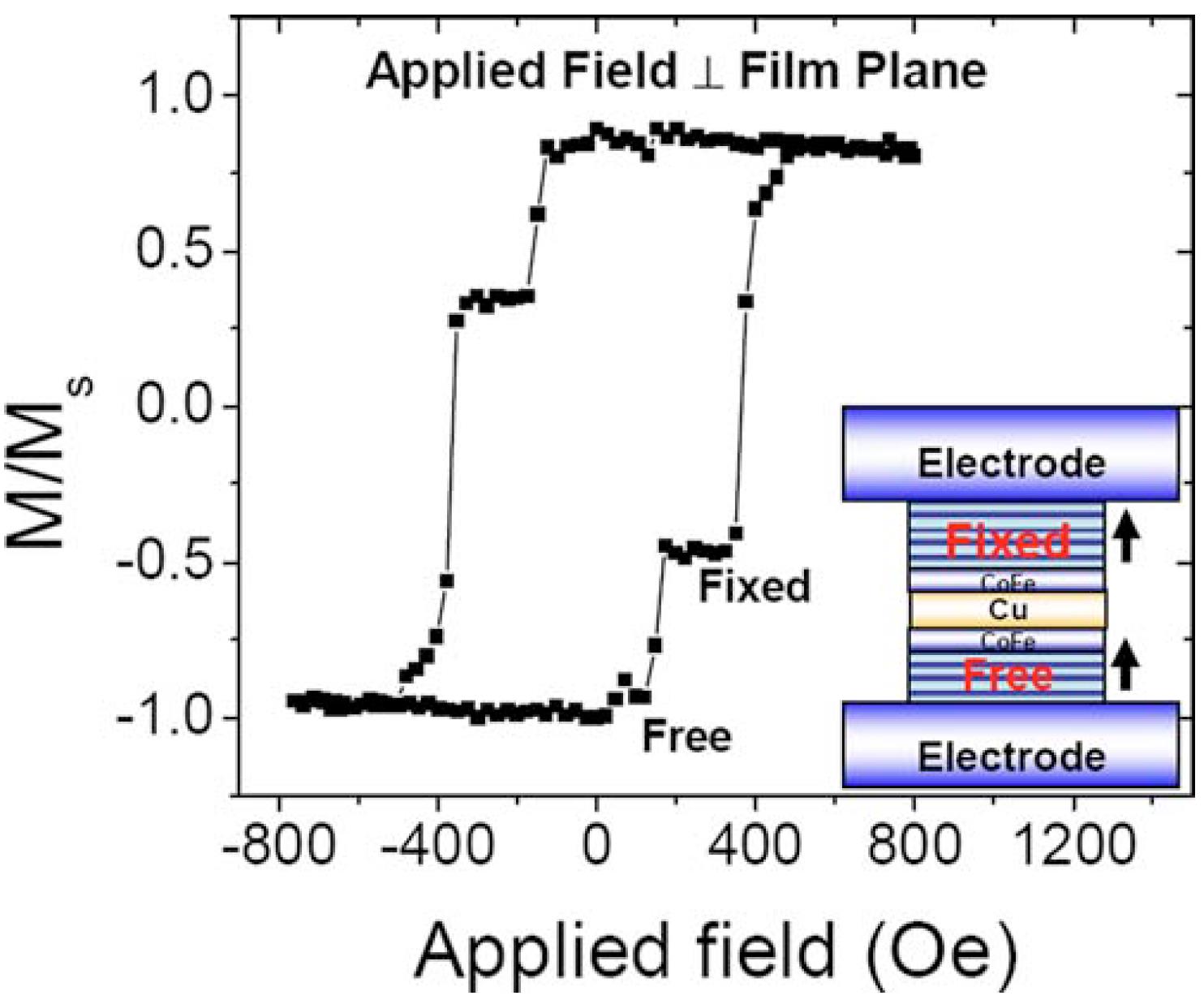 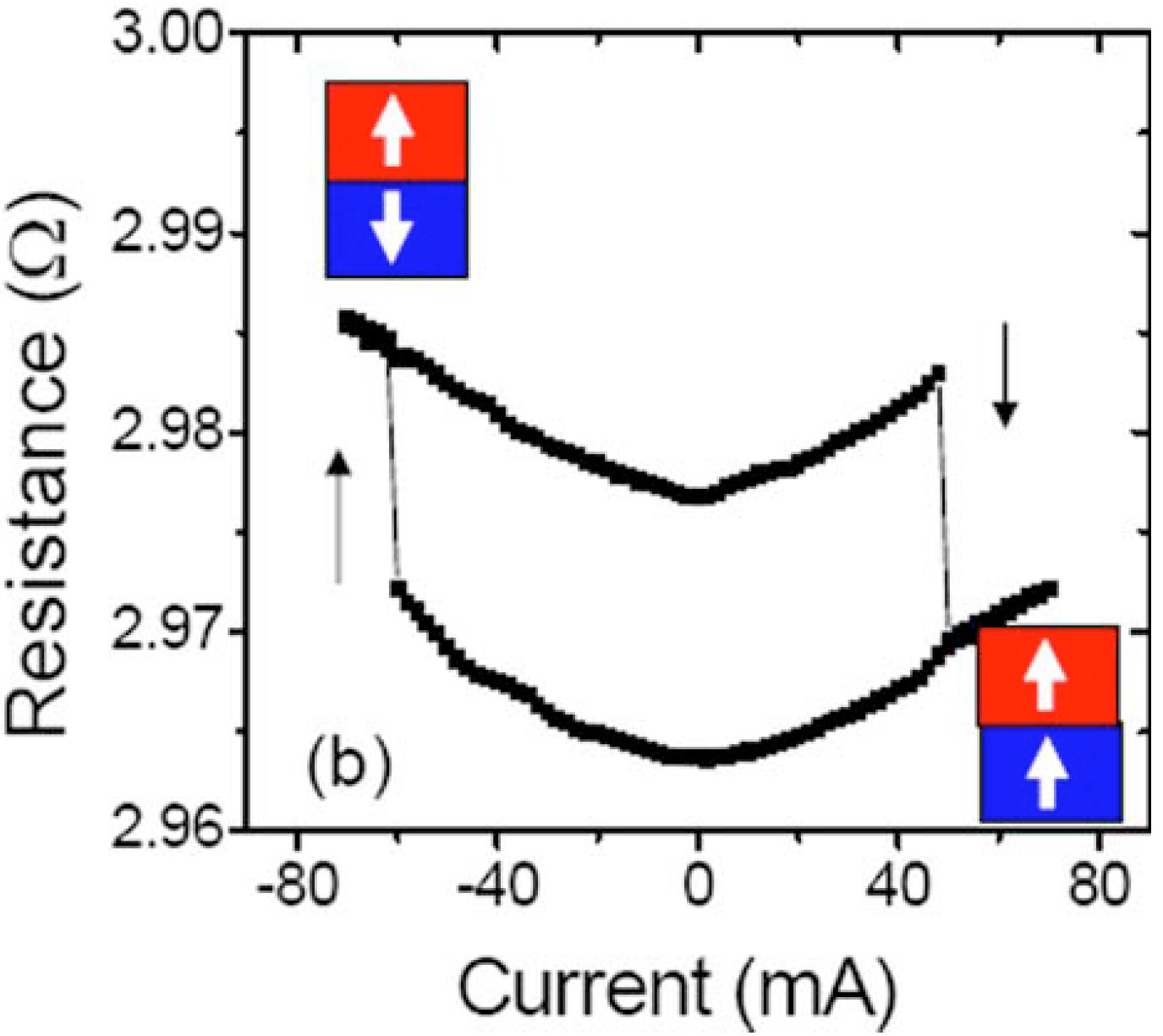 Ultrafast spin transfer torque (STT) switching in the sub-ns regime is one of the key issues for spin transfer torque random access memory (STT-RAM) development. One of the crucial limitations for ultrafast switching is the incubation delay induced by pre-switching oscillation. Several approaches have been proposed to minimize pre-switching oscillations in order to improve the switching speed in spin valves (SVs), such as developing all perpendicular structures, applying hard axis field to set the free layer equilibrium away from the easy axis, and adding an extra perpendicular polarizer. As of now, limited work has been done on sub-nanosecond STT switching in magnetic tunnel junctions (MTJs). We have reported ultrafast switching (165 ps–10 ns) in CoFeB–MgO MTJs with good tunnelling magnetoresistance (TMR) ratio around 100% and large coercivity (100 Oe) under zero bias field. With a basic conventional stack structure, the sample exhibits ultrafast switching in the sub-200 ps regime while maintaining all the requirements for STT-RAM application. 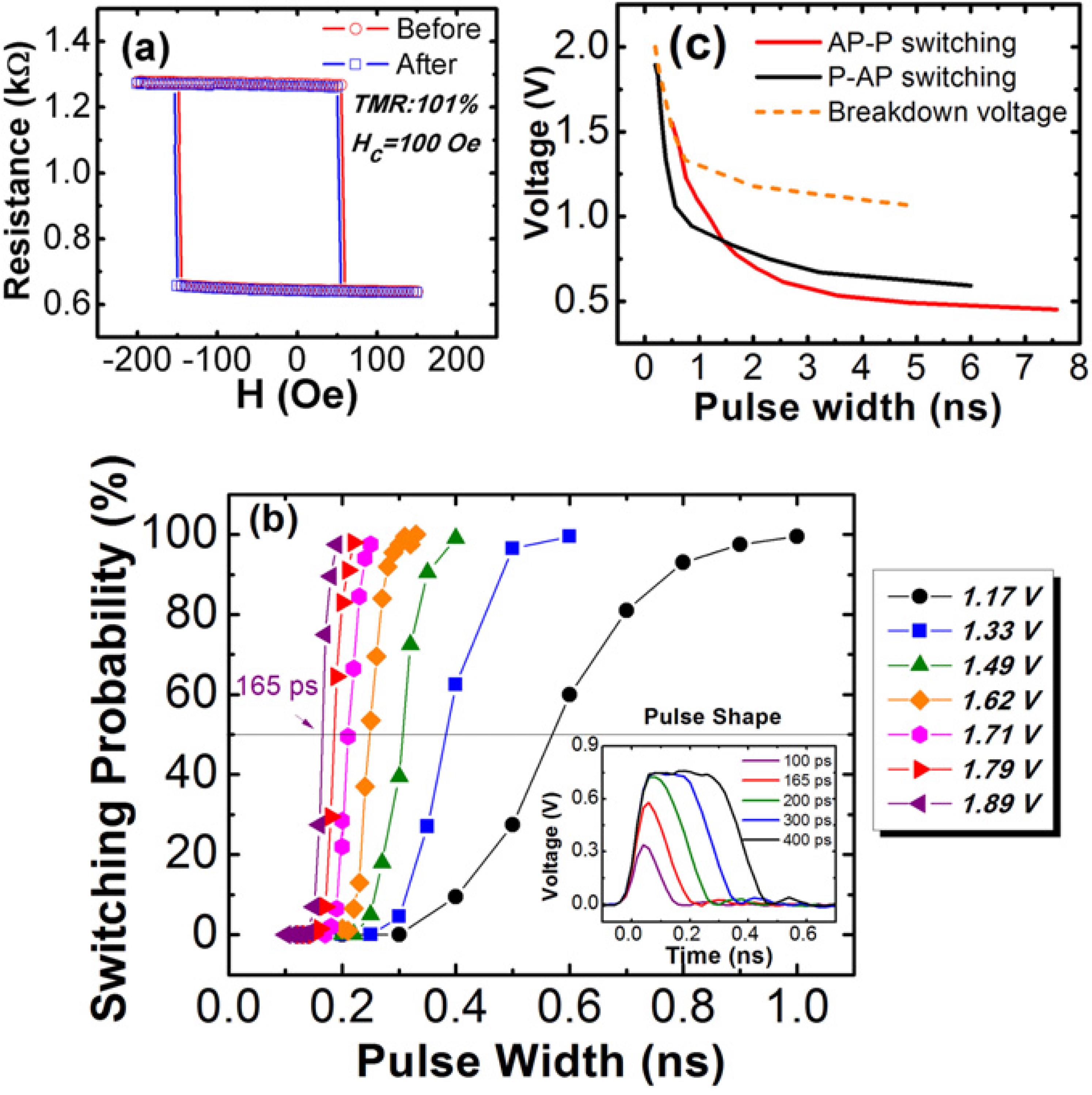 Programmable spintronics logic devices show many potential advantages compared to tranditional semiconductor logic devices, such as nonvolatility, rapid, unlimited reconfigurable variations and low-power consumption. Here, a progrannable spintronics logic device have been designed and fabricated based on a single pinned magnetic tunnel junction (MTJ) element. A current input line C passing through the MTJ element itself was introduced. Two separated input current lines (A and B) could switch the magnetization of the pinned layer under the heat assistance from line C. Full logic functions (AND, OR, NAND, NOR, XOR, and XNOR) can be realized based on a normal pinned and a synthetic pinned MTJ element. A Wheatstone bridge was engineered to read this single MTJ element logic device. 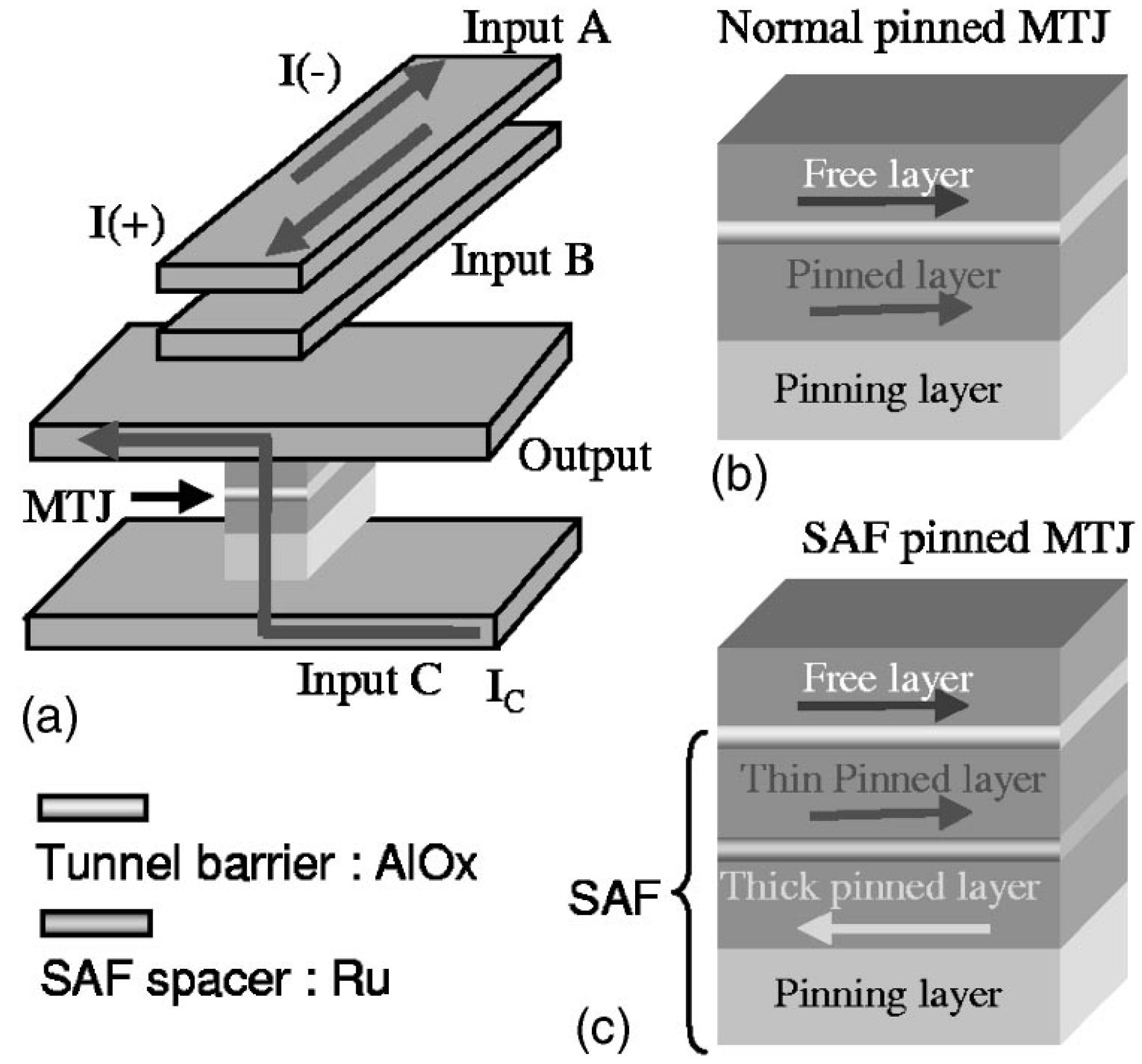 Figure 4. Working principle of the circult with three MTJs connected in parallel to form the input and connected in series with the output to form the voltage divider circuit. It could realize direct communication between MTJs. 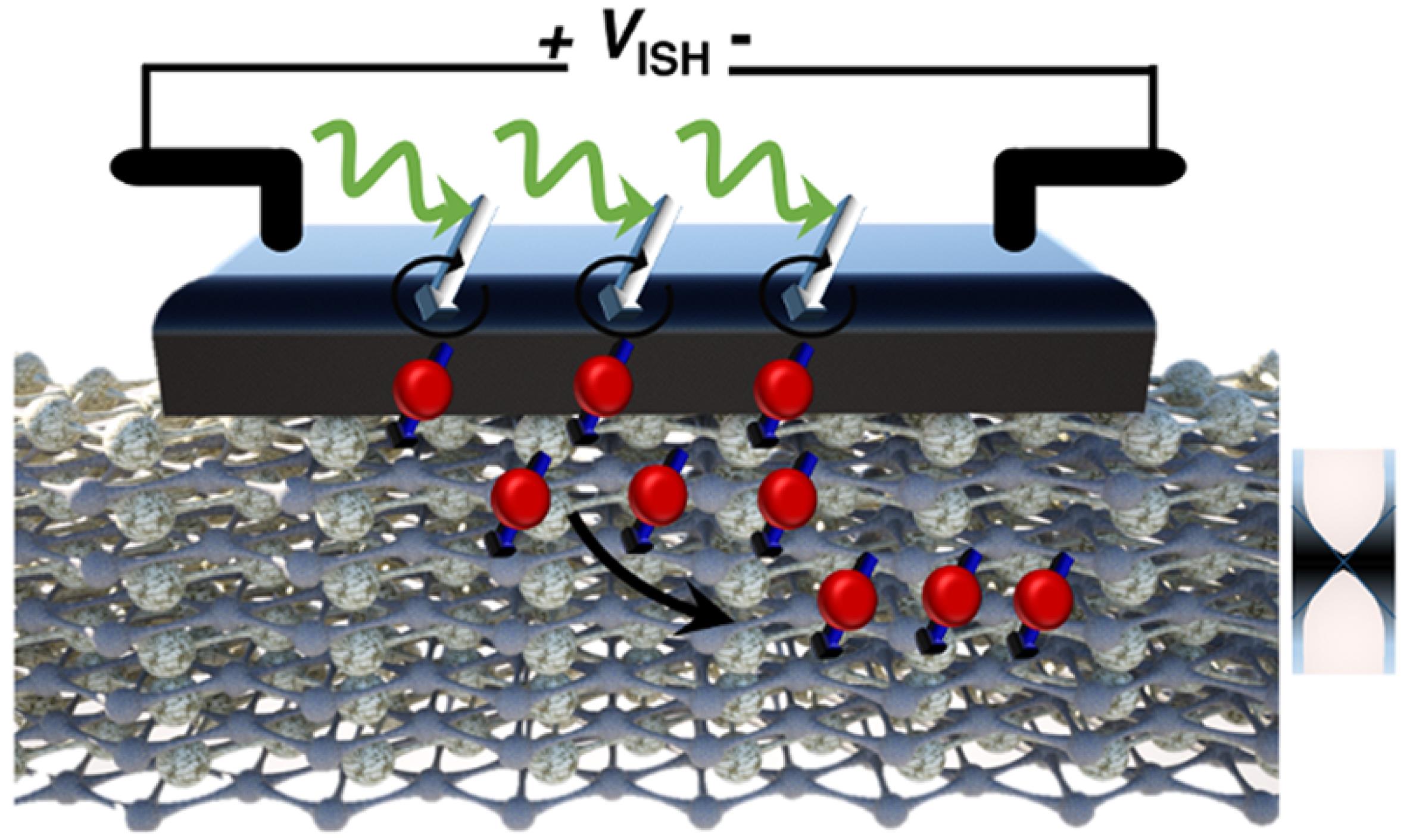